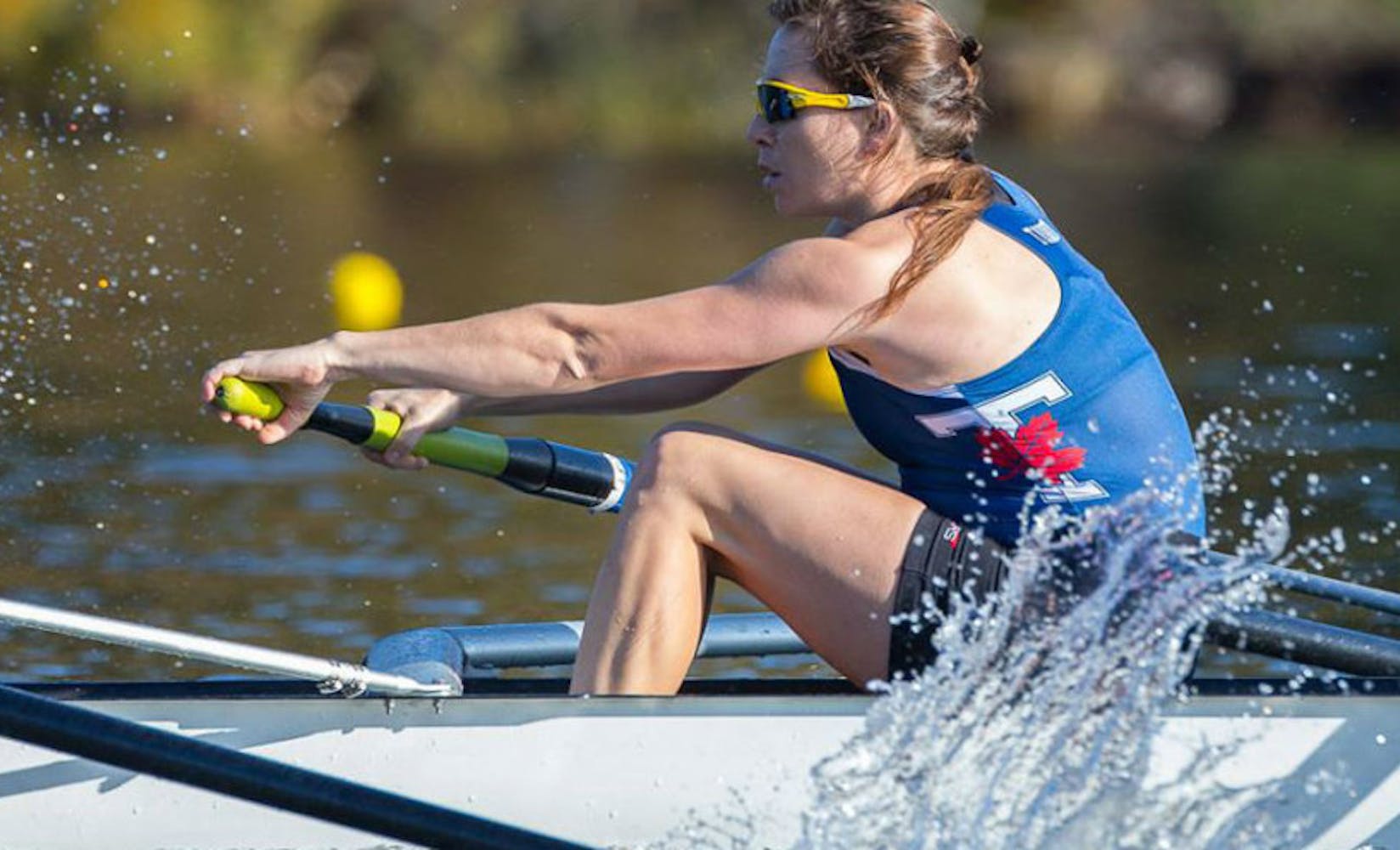 Claire Hutchinson is a phenomenal athlete, but you probably haven’t heard of her. After seven years of willingly sacrificing her social life, grades, and future to row for the University of Toronto’s Varsity Blues, and a few elite rowing clubs, the Hamilton native retired at the age of 28 with a resume full of rowing championships, no relevant work experience outside of her bachelor’s degree, and mountains of debt. Many of her fellow Blues were in a similar position. Due to a lack of funding for the school’s athletics programs, the cost of fulfilling dreams had shifted to the athletes and their families.

“So many great athletes have … had to stop for financial reasons,” says Claire. “Even Olympians, people think they make a lot of money but it’s not even a living for most of them.”

Claire’s dream job had always included helping athletes and their organizations receive funding, but post-grad realities found her scrambling to find any sort of purposeful employment. The dedication and discipline that she had learned as an athlete were almost impossible to convey to an HR representative; unpaid internships were much more valuable, she was told.

Lucky for her, that same dedication is what landed her dream job at a company that is truly working to revolutionize fundraising.

Sitting across from me in a trendy café on Queen St. West in Toronto, Claire’s athletic frame gives away her past career even through her business-casual attire as she recounts the hardships she and her parents faced to keep her dream alive.

“My parents basically came from poverty, they worked their way out while I was a little kid,” she says.

Claire started with highland dancing at the age of five, then added soccer and water polo as she got older. Her parents, an elementary school teacher and a social worker, made daily sacrifices to keep her enrolled in all these sports.

“They gave up a lot of vacations and probably retirement plans,” she says. “It didn’t matter to them because they saw how happy it made me.”

Claire first tried rowing when she started at the University of Toronto in 2007 and took to it immediately. After just a few weeks, one of her coaches pulled her aside and told her she had Olympic potential.

“I remember biking home with the kind of smile a shovel couldn’t take off,” says Claire. “Even though my quads were burning and the skin on my hands was torn to shreds, I distinctly remember thinking ‘Soak this in, it’s one of the happiest moments of your life.’”

Claire had entered rowing, or “crew” as it’s commonly known, relatively late as a 21-year-old. That meant training extra hard to make up for the gap, at a sport already known for its high level of dedication. Her days started with 4:15am wake-up for training, and ended with 9:00pm bedtime if she didn’t have too much coursework. She suffered through it with her crew, who she says were like “a second family.” Every semester, her family would lose a few members who simply couldn’t afford to keep rowing.

On top of the $500 enrolment payment and uniform, each tournament had fees of its own, plus travel expenses; each hour training or competing was an hour that could have been spent working, yet each tournament was an opportunity Claire couldn’t afford to miss.

“I once had a coach tell me that rowing truly is an elitist sport,” she says. “The rowers that make the national team either come from wealthy families or have chosen to live in substantial debt.”

The latter may not make sense to non-athletes, people lucky enough to have a passion that doesn’t run a total deficit and wreck their body by the age of 35, but athletes are people who have conditioned themselves to work through a tremendous amount of pain, physical and otherwise. The love of the game outweighs all other obstacles.

In the end, Claire didn’t make the national team. Despite having been tapped for Team Canada potential, she wasn’t able to shave the few remaining seconds off of her erg time in order to qualify. It was over.

She’d never known a life without rowing, and didn’t know what her next step would be. She considered putting her physicality and team loyalty to use in the police force, but didn’t want to give up on helping athletes just yet.

True to the lessons she had learned as an athlete, Claire gave one last push in looking for a job. She came upon a Toronto-based fundraising startup called FlipGive that was actively looking to connect with athletic organizations. Claire had first-hand experience with ineffective fundraising methods. She had sold chocolates door-to-door as a kid, which turned into raffles and expensive events as she grew older.

“We even had to sell cheese once,” she remembers. “Nobody actually wanted to buy it, they were just being nice.”

Claire saw FlipGive as a way to utilize her skillset and experience to help others, so she decided to apply. In her cover letter, she stressed her athletic history and the contribution it could bring to her role in the company. She admits that may have been a gamble, but it paid off when she made the cut.

Since January, she has been networking with athletic organizations and charities to provide opportunities for clubs who want to expand their fundraising efforts. She says it’s been incredibly fulfilling, and she’s excited about the potential that the platform provides.

“I wish (FlipGive) had been around during my competitive years, we definitely could have used it for raising our own costs or the team running a campaign,” she says. “Every little bit helps, and this kind of platform beats traditional fundraising methods by a landslide.”

When I ask if she would do it all again, or allow her future children follow the same path knowing where it leads, Claire doesn’t hesitate.

“Absolutely I would. There hasn’t been anything that has paralleled the feeling of fulfillment since I started rowing,” she says. “Rowing moved me like nothing else and it just gave me this continuous energy supply that I knew was pure passion.”