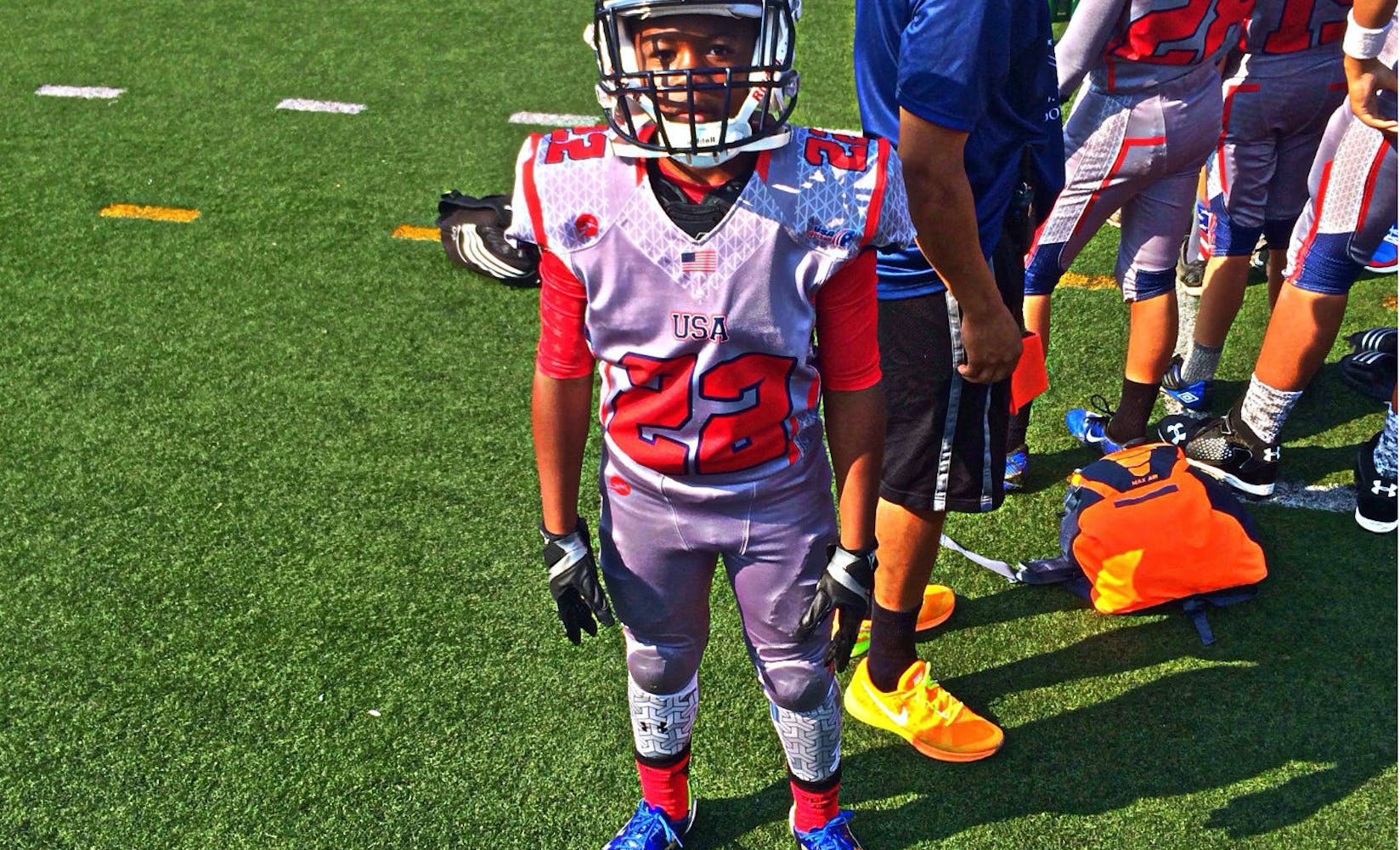 Born and raised in Philadelphia, Shuayb Brinkley has always dreamed of playing cornerback for the Philadelphia Eagles. But the more he’s played, the less it’s come to matter. Shuayb loves the game so much at this point that he doesn’t even care who drafts him.

“Nothing comes easy in sports, but I really have a passion for it,” says Shuayb, 13. It also doesn’t hurt that he’s phenomenally talented, having competed at the USA Football development camp against 13-year-olds when he was just 11. He’s already being tapped for NCAA potential after his showing at this year’s camp, but getting there will require dedication from Shuayb and his family. Lucky for him that isn’t something they take lightly.

Shuayb’s father goes by Abu Shuayb, which is Arabic for “Father of Shuayb.” Abu Shuayb has always worked and sacrificed to support his son’s development, but the financial cost keeps rising with the level of competition. Each trip is at least several hundred dollars, with a recent one costing almost $1900.

“The camps are great for the (players’) exposure and development,” he says. “But sometimes, it’s a lot.”

On the horizon: more camps, more trips and more financial pressure. Abu Shuayb says he has always worked and sacrificed to support Shuayb’s gift, but was forced to go on disability earlier this year; he decided to reach out to friends and family to help send him to the 2015 development camp.

He started a campaign on FlipGive, an online fundraising website geared towards empowering young athletes and their teams through proceeds from online shopping. He says he, “didn’t want to come begging” for help, so he chose FlipGive because its model allows contributors to make a purchase and have part of the proceeds go towards a fundraising initiative.

“I’ve never set up a campaign before so I really didn’t know what to expect,” he says.

It went far better than he could have imagined. Abu Shuayb raised $1870 in just a few weeks, all from his family and community. He says the campaign could have generated even more, but he had to end the campaign early so he could collect the funds in time for the camp. The remaining money will help pay for Shuayb’s trip to the National Development Games in August.

After that, things are uncertain. They’ve already had to turn down an invitation to a prestigious camp in Texas this August for financial reasons.

Abu Shuayb hopes to be back at work soon, but says he could see himself setting up another campaign in the future.

“At the end of the day, I’ll do anything to keep supporting Shuayb.”

Die-hard fans love to think of athletic competition as the one part of life where the best truly rise to the top; in reality the cost of enrolling young people in sports has always kept gifted athletes from competing, and has been rising steadily for over a decade. The recent economic downturn has only complicated things for families already struggling to support young athletes, and simply asking for donations often isn’t enough to make up the growing difference.

For what it’s worth, he sees hope in successful campaigns like his own.

“I could definitely see (FlipGive) helping close the gap,” he says. “It’s a great way to reach out and get people interested in helping.”